Benidorm Foot Golf Day Out - contact us or call in to our shop to book €59 Euros per person which includes return transfers from Benidorm. 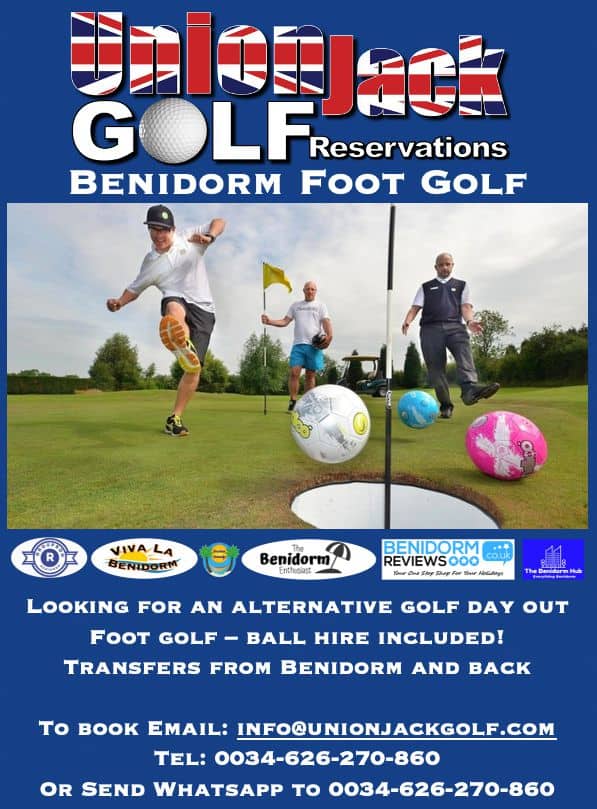 Foot Golf is the perfect alternative to a golf day out in Benidorm if all of your group can’t swing a club. We include transfers to the course and back and include the ball! The price is €59 Euros per person with all transfers and ball included. Contact us or call in to our shop in Benidorm on Calle Gerona – We are on GOOGLE MAPS

To request your foot golf tee time simply fill in the below form and one of our team will be back in touch with availability. Tee times only available from 12:00 onwards each day. The Foot Golf course is a 40 minute transfer from central Benidorm. The price of the transfers is included in the package price.

Fill out the Booking Form Below to Reserve your Benidorm Foot Golf Day Out with Transfers and Ball Hire included!

If you are already in Benidorm and fancy a round of golf but your mates can’t play. Then look no further for your Benidorm Foot Golf Day Out. We pick you up at your hotel take you to the course and check you in at the golf reception and show you around so that you get your bearings and know where things are such as the first tee.

Once you have finished your round and the visit to the 19th hole then just give us a call or send us a Whatsapp and we come to collect you and take you back to your hotel. See our contact us Page for phone and Whatsapp details.

During the play of a hole:

You can check out the detailed official rules here http://www.fifg.org/the-rules.html

This is a simplified version and if it is your first time playing don’t worry, it’s meant to be fun!

Check out our reviews on Google Here!

Contact Us for any queries about your Benidorm Foot Golf Day Out.